Where does the time go... 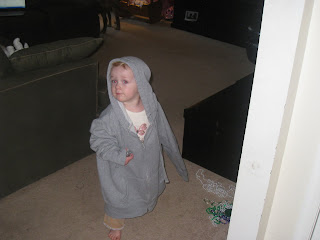 Alright, so I have been so slack on the blog...but I do have a really good excuse. So on top of working my normal 40+ hour a week job and trying to work on my transcription class, I've now decided to take on a second job to help bring in extra money. I told you a few posts ago about the Premier jewelry. I had my debut show over the weekend and start having my own shows next week. It has been taking up a lot of my time. I am super nervous about presenting in front of a group of people, but if I can just get through my first few shows I know that I'll be fine. Oh and one other thing...I'm pregnant, so I'm tired. Which means I never make it upstairs to dump the camera. Most of you have probably already heard by now. I've sent a few emails and I've posted it to facebook, but for those of you who haven't heard...yes I am having another baby. Ainsley will be a big sister next spring. Our due date is April 1, 2010.
So now that it's out there, let me catch you up on the last couple of weeks...
Last weekend I had to leave my little bug for the whole weekend, which I have never done before and was so very hard. I missed her and Clif so much I could barely stand it. Don't get me wrong, I had a really nice weekend in Maryland with my cousins, but it is tough to go a day without seeing that sweet little face. 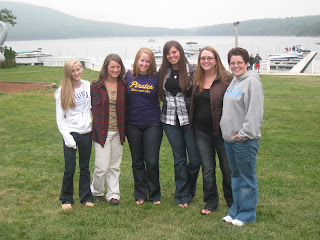 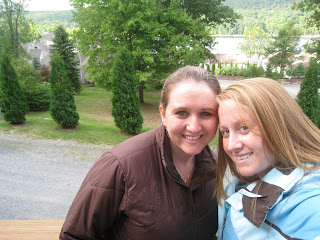 While I was gone Ainsley asked to use the potty twice, and actually used it twice. She also mastered climbing out of her crib. I was planning on waiting until the new baby's arrival got closer before switching her to a bed, but I'm thinking we may have to move that up a bit. Not that she ever sleeps these days...so not even sure what it matters. I don't know how she runs on so little sleep.
This past weekend was my debut jewelry party...so now I officially start having my own shows. The party went really well. I had a great time and I thought it was very successful. After the party we ended up having dinner with my friend Julie and her little girl Katherine. It is rare that we're able to snap a picture of the girls. We either forget or one of them is moving, crying, looking away, etc. 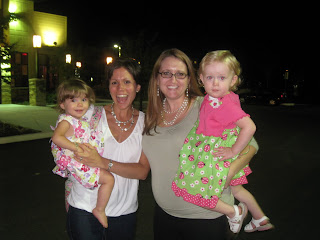 Then on Sunday we were very lazy and watched football all day. Ainsley can almost sing "Hail to the Redskins!" 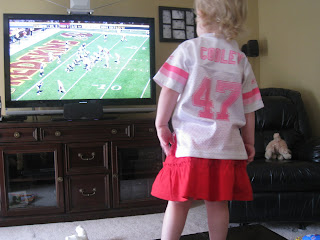 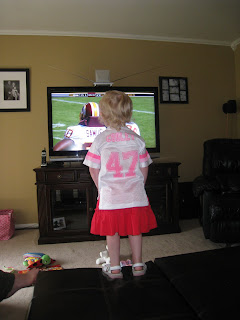 That's about it, things are pretty dull now that we've decided not to travel so much and I'm too tired to do much of anything at night.
I promise to get my butt upstairs on a more regular basis and get updates posted.
Hope all is well and hope every one's weekend gets here quick...especially mine. 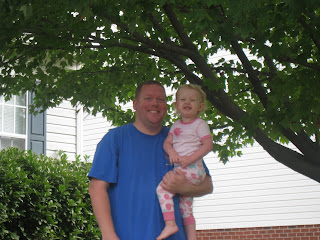 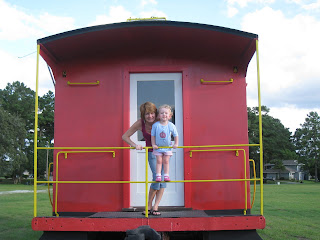 Last weekend we went to visit my mom. It was a short trip but it was nice to spend time with her in her new house. We went shopping on Saturday and mom bought Ainsley a pair of Squeak Me Shoes. I had never heard of these shoes, but they squeak when she walks. Ainsley loves these new shoes. She put them on in the mall and proceeded to run in circles in the hallway yelling "Mommy, I yove dis dame!!!!" (Mommy, I love this game!) Unfortunately I did not have my camera with me at the mall, but I did get this video of her a little later so you can get the gist of the shoes.

I told my mom that every pair should be sold with a matching t-shirt that says "Don't blame mommy, my grandmother bought me these shoes." 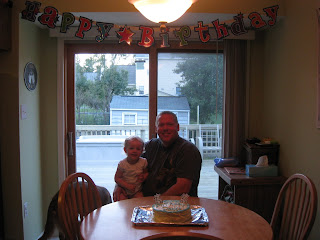 Last weekend was also Clif's birthday. Ever since Ainsley's birthday, it is just about her favorite thing to sing her version of Happy Birthday to everyone. Here's a clip of her singing to Clif.
Ainsley and I rushed back home to hang up the birthday banner and make Clif a birthday cake. 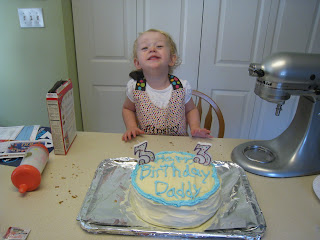 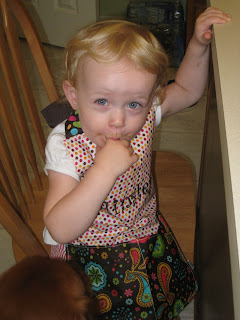 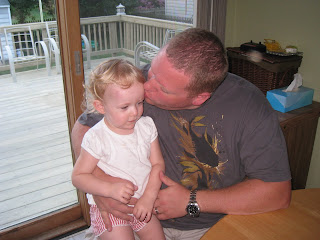 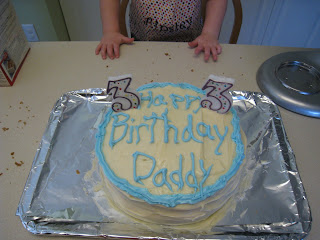 It's been a crazy month with weddings and out of town travels, so this Labor Day weekend we just stayed home and caught up with friends. Saturday night we took Clif to a Japanese Steak House with some of his friends to officially celebrate his birthday. Then Sunday Nanny, Poppa and Non Non came down to visit for lunch and Ainsley got to ride the train with Nanny. 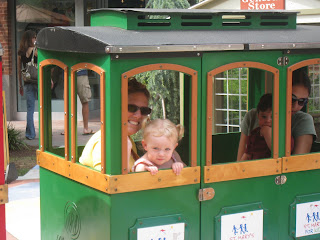 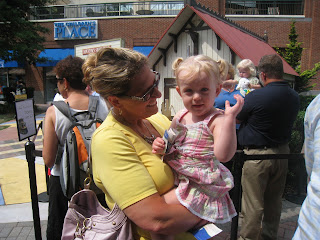 Today is Poppa's birthday so Ainsley and I made him a berry pie and we got to sing to him as well. Finally last night we had some good friends over that we hadn't seen in awhile. So now it's Monday and we'll probably spend the day running errands and cleaning up the house. It sucks to go back to work tomorrow, but I only have 3 days this week. Next Friday my sister and I are driving to Maryland to spend the weekend with some of our cousins. Very excited to have a girls weekend and get away, but very sad to leave my little bug for a whole weekend. 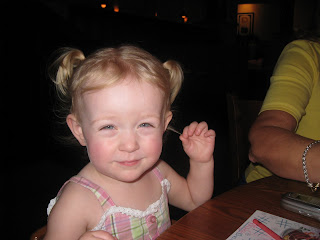 Daily Deals on Juice in the City